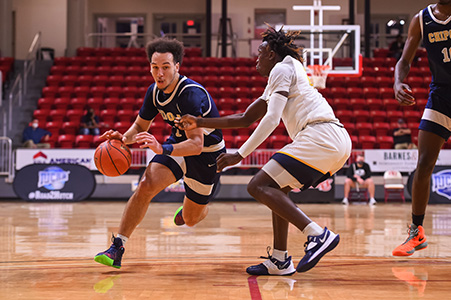 HUTCHINSON, KS—The Chipola Indians (22-4) used a strong defensive performance to defeat Shelton State 73-60 and move on to the quarterfinals where they will face No. 14 seed, Indian River, a team the Indians defeated in the FCSAA Championship, 88-75, on April 10.

Chipola and Indian River tip off at 8 p.m. Thursday, April 22, from Hutchinson Sports Arena. Indian River earned their spot in the quarterfinals with a 94-82 win over No. 3 seed College of Southern Idaho.

Games are pay-per-view on NJCAA TV at https://stats.njcaa.org/network, or follow #NJCAAmbb on Twitter. The tourney runs through April 24, with the championship game set for 6 p.m.

Shelton State averaged 81.2 points per game and were held to their second lowest output this season. The Indians held the Bucs to their lowest field goal percentage of the season, 27.7%, well below their average of 43.7%.

Carlos Lemus led the Indians, scoring 19 points including a perfect 6-for-6 free throws. Jaeden Zackery chipped in 16, and Nae'Qwan Tomlin scored 14. The lead changed hands four times in the first half, but Lemus sank two free throws to give Chipola a 32-31 edge at the half.

Shelton scored on the first possession of the second half to move out in front of the Indians and took their largest lead of the game, 39-34, on an old fashioned three-point play with 17 minutes remaining.

The Indians used a 9-0 run to take the lead for good as the defensive pressure became too much for the Bucs. The Indians forced 11 turnovers in the second half and Naheem McLeod made his presence known underneath with six blocked shots and six rebounds.

Chipola Coach Donnie Tyndall said, "I was pleased with our defensive intensity and effort but we simply have to take better care of the basketball.  I thought Shelton and their coaching staff did a great job. I have a ton of respect for Shelton Coach Joe Eatmon. It was a hard-fought win."