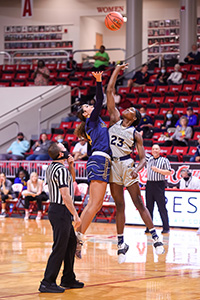 The Chipola Lady Indians led by as many as 19 but needed a three-pointer from freshman Shimei Muhammad at the buzzer to defeat Eastern Arizona 71-68 in the second round of the NJCAA Women's Basketball Tournament in Lubbock, Texas, on April 21.

Chipola took control of the game early and led for more than 36 minutes, but the Gila Monsters scored 30 in the fourth quarter to tie the score with under a minute remaining. Arizona had possession of the ball with 15 seconds remaining, but Chipola's defensive pressure forced a turnover on the opposite end of the floor with 4.9 seconds on the clock.

Chipola Coach Greg Franklin used a timeout to set up the final play but more importantly was able to advance the ball to right in front of his bench. Shimei Muhammad threw the ball into Isadora Sousa, who drove the ball under the goal but was cut off. She kicked the ball out to the free throw line to Brenda McKinney. McKinney quickly shuffled the ball to Muhammad at the top of the key, where she drained it as the horn sounded.

The Lady Indians had to overcome an excessive number of fouls in the first half. After the first 20 minutes of play, four of Chipola's nine players had at least three fouls. In all, 73 free throw attempts were made in the game, and 54 fouls were called.

The other Panhandle team remaining in the tournament, Northwest Florida, defeated Otero, 67-43. The Raiders will take on No. 4 seed South Plains College Thursday, setting the stage for a rematch between Chipola and Northwest if both are able to advance to the championship.

Games are pay-per-view on NJCAA TV at https://stats.njcaa.org/network. The championship game of the national tourney is Saturday, April 24, at 3 p.m. CST.