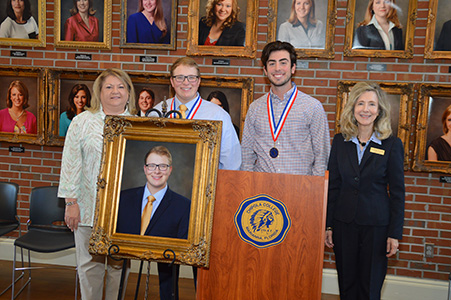 The two Chipola sophomores were among 137 students named to the All-Florida Academic Team from the nearly 1 million students in the Florida College System.

Rich also was named a Coca-Cola Silver Scholar. His portrait will hang on the Chipola College Academic Wall of Honor for winning the national award.

Bailey Rich of Bonifay, is the son of Dwight and Heather Rich. He is an Exercise Physiology major who plans to transfer to Florida State University. He graduated in 2019 from Holmes County High School where he was involved in Fellowship of Christian Athletes, Key Club, Beta and Future Business Leaders of America as well as lettering in Football and Basketball.

At Chipola, Rich is a member of the Honors Program, Science Club, and Mu Alpha Theta. He also is President of Phi Theta Kappa and Pre-Med Society along with being a tutor in the Academic Center for Excellence (ACE) and a student assistant for Chipola's Men's Basketball team.

Through PTK, he organized a food drive for children in Africa, and developed a campaign known as COVID Caring which provided handwritten letters to residents in nursing homes.

Parker Hooper of Bonifay, is the son of Ernie and Sherri Hooper. He is an Exercise Physiology major who plans to transfer to the Florida State University. He graduated in 2019 from Holmes County High School where he was involved in baseball, golf, Key club and BETA.

At Chipola, Hooper is a member of the Honors Program, Science Club, Mu Alpha Theta, Phi Theta Kappa, and is a tutor in the Academic Center for Excellence (ACE).

Through PTK, he has organized book drive for students in Africa. He also established “Chem for Kids” where he performed science experiments at local elementary schools.

Phi Theta Kappa is the premier honor society recognizing the academic achievement of students at associate degree-granting colleges and helping them to grow as scholars and leaders. The Society is made up of more than 3.5 million members and nearly 1,300 chapters in 10 nations. Learn more at ptk.org.