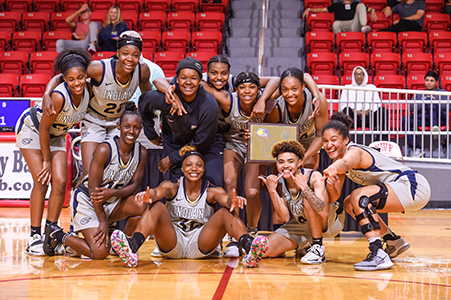 Chipola plays the winner of Moberly and Eastern Arizona, Wednesday, April 21, at 5 p.m. CST in the National Tournament. The championship game of the double-elimination tourney is Saturday, April 24, at 3 p.m. CST.

The Chipola men’s team also won the 2021 State Championship on April 10. The year 2014 was the last time both Chipola teams won the state championship.

The second-seeded Indians trailed 12-10 after one quarter but took control, outscoring the Commodores 20-7 in the second. Chipola led by as many as 15 in the third quarter and was able to keep Gulf Coast at bay over the final 10 minutes.

Gulf Coast entered state as the No. 5 seed and beat No. 4 Florida SouthWestern in the quarterfinals, then pulled the upset of the tournament, knocking off top-seed Northwest Florida State, in the semifinal round.

The state title is Chipola’s seventh in school history. In his ninth season at Chipola, Coach Greg Franklin has accounted for 3 state championships with 2 second place finishes and a national title in 2015.