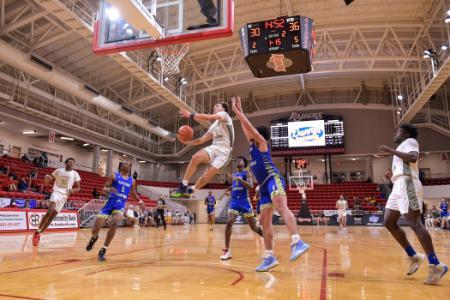 The Chipola Indians’ season ended in the final four of the NJCAA National Tournament with a 66-63 loss to Coffeyville on April 24.

Chipola overcame a 14-point second half deficit and took the lead with two minutes in the game but could not hold on. The Indians led much of the first half and had a 29-28 lead at the break. The Red Ravens went on a 14-2 run to open the first five minutes of the second.

Carlos Lemus tied a season-high of 27 points in the loss. Jaeden Zackery finished with another stellar performance in the NJCAA Tournament, scoring 17, his ninth consecutive game scoring in double figures.

Chipola made it to the final four with a 78-75 win over Indian River on April 22. The Indians also beat Indian River 88-75 on April 10 to take the FCSAA State men’s state title.

The Indians used a strong defensive performance to defeat Shelton State 73-60 on April 21 to advance to the quarterfinals of the national tourney.

Chipola has 14 FCSAA men’s state titles, more than any other college in Florida.